If you're tempted to use a PENTIUM or one of the exotic 586s, then investigate if your system allows write-back cache. The 486s used "write-through" cache where the CPU writes data to memory external to the processor. With write-back cache, the CPU uses memory designed into the chip - a much faster method. Some 486s have a jumper to enable write-back cache. It's not unusual for this jumper to fail to work!

For a motherboard that does not allow for write-back cache, there are two options. First, just get used to living with a white-bread 486 as the only upgrade option. The other option is to look for an upgrade kit with a voltage regulator that disables the write-back cache feature of the CPU. This will not be as fast or powerful as write-back, but at least it will work with the motherboard that's there now. 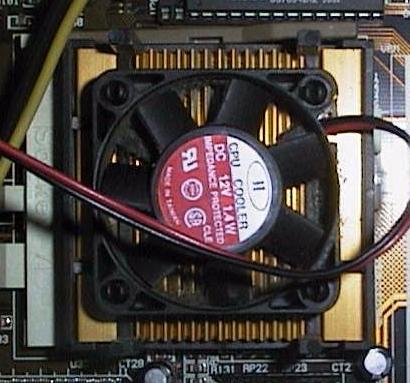 When installing a more powerful processor, unless definitely impossible, put in a CPU fan. At the very least, be sure to use a heat sink. It's a good idea to use both a heat sink AND a CPU fan!

Kits are available that include the processor, the voltage regulator, the heat sink and/or CPU fan. This is generally the best route to take, for all the items are tested, and guaranteed, to work together.

Socket types 1 - 7 are ZIF (Zero Insertion Force) sockets. Before counting pinholes, examine the socket. The socket type number might be printed on the socket. 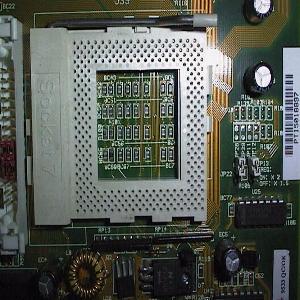 ZIF Socket. Lift The Handle And The Pressure Is Released.

The Pentium OverDrive processor upgrade can't be done in a 486 system that has a socket with 17 pinholes per side (168- or 169-pinhole socket) . In order to install an Intel OverDrive CPU, the socket must have 19 pinholes per side (237- or 238-pinhole socket). You can tell this by just glancing at the original Intel486 processor while it's still in the socket on the motherboard. If the 486 chip is installed in the same socket that the OverDrive is to use and there is an extra row of pinholes around the processor, then the socket has 237- or 238-pinhole. This means that he PENTIUM OverDrive will fit.

For a PENTIUM upgrade, particularly one with MMX, a BIOS upgrade will also be on the agenda. Intel maintains a searchable database of BIOS upgrades . If you don't change the BIOS, the system might not work at all with the PENTIUM processor. The computer might chug along until you try changing a card and then fail. In either of these two case, returning the original CPU should bring the machine out of its coma.

How do you remove the CPU chip from its socket? Very carefully! (Of course, as always, make sure that the power cord is removed from the system unit. Before handling the processor chips, first touch a large piece of metal to discharge any static electricity that you may be carrying.) If you are dealing with a ZIF socket simply gently release and lift up the little handle. You will now, if necessary, be able to lift out the original CPU and just drop in the upgrade. Closing and catching the handle completes the installation

Older CPU Socket. Note The Square With The One Edge Angled Off That is Silk-Screened Onto The Motherboard. The Dot On The CPU must Point Towards This Slanted Edge!

The original CPU sockets are a little trickier. Upgrade kits often come with a small tool like a miniature rake for prying the old processor out. I just use a tiny screwdriver. Whatever you use, work a little bit at a time. Start at one end and slowly work your way around. After about half way, the pressure is basically off the pins. You're not trying to catapult the chip out like a tiddlywink or something! The real pain is putting in the replacement CPU. A certain amount of ooomph is needed to seat the thing. Definitely, first make sure that all the pins are properly lined up in holes. If you try to push it in crooked, pins will bend or break. This can kill the chip. Abuse is very rarely covered under the warranty. Also take care as you push the chip into the socket that the motherboard itself does not get stressed and crack. I suggest taking the motherboard out of the case. Remove the plastic standoffs. Place the board on a flat, secure, solid surface before pushing down on the upgrade processor. The level plane will evenly support the board. Hope for a ZIF socket! 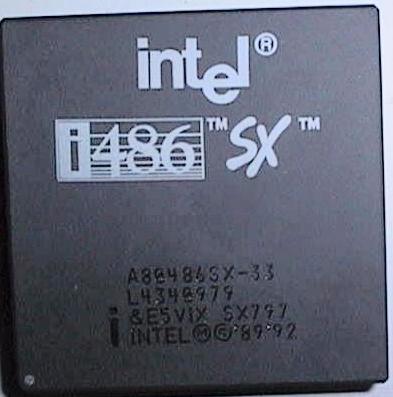 486 CPU. The Dot On The CPU (Just Visible In The Bottom Left Corner) Indicates The Orinetation Of The Chip.

Processors must be installed in the proper direction. There is a dot or some other pointer on the chip itself. This must line up with a slant in the square that is silk- screened around the CPU socket. Sometimes a little arrow on the board shows where the dot of the CPU is to go.

In my experience putting a CPU in backwards does not hurt, but it will not work. Getting the little bugger in and out is such a pain, you want to insert it right the first time.

Is any of this worth it? Often it isn't! If you've got a 486SX25, it's essentially de rigeur to upgrade before your friends give you the nickname of Packard Bell!

With almost any of the 486DX chips, the situation becomes less clear. I just don't see the benefit of the PENTIUM processor upgrades for a 486 board. For less than a $100 more, you can install a brand new PENTIUM motherboard with PCI, DIMM, EIDE, auto hard drive identification, and all the other state-of-the-art goodies. If your motherboard uses 30 pin SIMMs and you also need to increase memory, get a new motherboard!

If you're still gung-ho on a Pentium chip upgrade, Intel has OverDrive CPUs for many systems.

For PS2 computers, chip upgrades make more sense. Industry-standard motherboards will not fit in a PS2 case and can not use the PS2 power supply. PS2 RAM, hard drives, floppies, etc will also not work with a "normal" motherboard.

And what really are the bottlenecks in your system? If WINDOWS is choking on paltry RAM, a tired, eggbeater hard drive and/or an impotent video card, a processor or a motherboard upgrade will probably be of no benefit.

For reliable operation, motherboards that don't support a write-back cache, the AMD 133 MHZ Am5x86-133 must be used with a voltage regulator that disables write-back cache.