The Garbage Can PC

Last modified:
The modification date refers only to this menu.

You're pulling into the parking lot of a large office building. It's very crowded, so you've got to drive around back, almost next to the garbage dumpster. Just as you're pulling in, your eyes open wide. Sitting there waiting to get tossed is a skid full of PCs! This has got to be your lucky day!

Probably not. The Dumb Terminal

Dumb terminals are hooked-up to a mini or a mainframe computer, most often through a phone or other serial link. Without the heavy computer locomotive out front, the dumb terminal is just not going anywhere! That the dumb terminal "works" - displays some sort of prompt when it's plugged in -- is besides the point. Unless, and until, spurred on by a real computer, the prompt is in the same class as the twitching of the legs of a squashed bug -- proof really only of the absence of processing, not of its presence.

There used to be a TV repair shop around here that would sell dumb terminals to dumb customers. I was marketing used computer equipment at the time. The poor victims would then proceed to drag the dumb terminal to me, having been told by the TV repairman/con artist that, "it works good, but just needs a part." The sorry task would then fall to me to explain that the "part" required was an IBM 360 mainframe!

For the tinkerer there are just about only two uses for dumb terminals. Hooked up to a TNC and a tranceiver, a dumb terminal can be used for packet radio. A standard PC is a much better choice, though, for, lacking any hard or floppy drive, the dumb terminal can not log or otherwise store information. What this means is that with a dumb terminal for packet, you can only read messages as they scroll across the screen.

The other use is the intended one. With a PC running UNIX, or some other multitasking OS, an operator at a dumb terminal can either maintain and administer the system or run programs remotely on the host PC. If the PC has enough RAM and processing brawn, a large number of users can work virtually simultaneously. Some BBS programs can also be configured to work this way.

As could be discerned from the preceding discussion, used dumb terminals have no resale value. As a matter of fact the display is particularly hard to dispose of -- within EPA guidelines, at any rate. 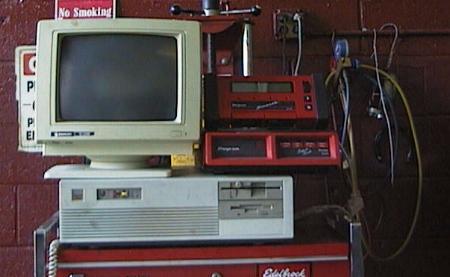 Through The Serial(COM)Ports, Nearly Any PC Can Be Used To Control, Log, And Display A Wide Variety Of Devices. Here, A Professional Auto Technician Uses An IBM Compatible With A Vehicle Diagnostic System.

The original PROCOMM communications program also works very well on this tired hardware. You are going to need PKUNZIP to "decompress" the file.

With a communications program and a modem you can use a PC or XT to browse BBSes. With an Internet shell account, a PC/XT can use all of the text-based facilities of the net -- E-MAIL, FTP, USENET, TALK, and lots more. Through TELNET, programs can be run on a remote system, which might be a powerful PC, a Mac, or even a super-computer! With Lynx as a browser, text information can be accessed on the World Wide Web.

If you are using an internal modem, any model should work with any IBM compatible that is NOT MCA (The PS2s, except for the models 25 and 30 use MCA). With an external modem the speed of the UART chip becomes a consideration. An external m odem connects to the serial port - the 9 or 25 pin male connector. The older serial ports used a 8250 UART chip. This is fine for modems running at 9600 Baud or less. For 14.4 or faster modems, a 16550 UART chip is required. With the PC and XT, it's not easy to replace the serial card for often the communications ports are built into a memory expansion/extension card. Taking out this card will, as a rule, remove 384K of RAM from the system, leaving the system with only 256K. Most progr ams need the full 640K. If the 8250 UART is in a socket, it's possible to carefully pry(WITH POWER OFF, OF COURSE)it out and exchange it with a 16550.

With a fax/modem you can send faxes from a word-processing program on a PC/XT. A fax send is basically the same as a print to the computer. These PC senior citizens are just not up to fax receive. A fax receive really needs a minimum of a 386 and a VGA monitor.

Hackers and phreakers often use old systems to ply their trade. This way if the source of dubious calls is traced, the seizure of the machine is no great loss.

The original PC had a port in the back for hooking up a cassette tape deck. This was basically a useless concept left over from some TRS-80 mentality. I never met anybody who used a cassette tape with an IBM PC. You might want to try it - like if you are doing life without parole and need something to keep your mind occupied and they won't let you keep canaries in your cell.

The first big "upgrade" in the video department was the CGA color monitor. You can still buy new CGA display cards. A CGA display was a cartoon-colored, eyeball-twisting horror. But it did allow for graphs and crude graphics which were not possible on the monochrome monitor. With CGA, for the first time, graphic games became possible on the IBM personal computers.

Right here lets give everybody a healthy dose of reality. Get the idea out of your head that you're going to get an old computer for nothing and then "set it up for the kids to play some games on." When I was in the fourth grade in the mid-sixties (year, not longitude), my mother gave me a black and white television for my birthday. I HAD MY OWN TV!!! Nobody could talk to me for about a month. I became the most stuck up little brat that you could imagine. End of flashback. Recently, a friend of mine gave each of his two grandchildren a black and white television set. They refused to use the "broken" color-challenged equipment! Kids in the nineties (year, not streets), are sophisticated and severe critics of technology. They won't accept third rate, let alone fortieth rate.

For text-entry, a monochrome monitor is superior to a CGA.

The big jump from the XT was the XT TURBO. These used various 8 or 10 mhz 8088 chips. For elementary wordprocessing, the difference is essentially invisible.

One big advantage with the XT TURBO is that there are voice mail cards that work very well with them. With one of these adapters and an old clunker of an XT clone you can devise a voice mail system that would be the envy of a large corporation. One very popular brand even allows for numeric entry (so callers can input credit card numbers), calling an emergency number when a alarm goes off, paging you when you get a message, automated delivery of a message to a list of phone numbers, and lots more

A common children's crusade is trying to install a 3.5" floppy drive into a PC/XT or an XT TURBO. It's not easy. Special cards were sold that were supposed to do this. They often were hell to get to work. The DOS DRVPARM statement in the config.sys was supposed to do the trick, but usually didn't. In any event, a lot of tweaking was required. If you really need a 1.44 meg floppy, hold out for a 286 TURBO. It's easy to put a new drive in one of these.

IBM made two models of PS2s that were essentially XT clones with 720k floppies. The model 30 is a conventional desktop system. The model 25 is an integrates monochrome VGA monitor and system unit. If you can find an 20 meg HARDCARD hard drive, it's easy to install into a PS2 model 25.

286 upgrade cards for 8088 systems were once manufactured. At this point, it's not worth bothering with them.

Because of the placement of the floppy drive mounts, new motherboards will not fit into a PC or an XT case without a lot of sheet metal work. The PC had a 63.5 watt power supply which was not really sufficient even back then. The XT (and its imitators) had a 150 watt.

The AT - Advanced Technology

IBM's next quantum leap in PC architecture was the AT. The first widely available 286, the AT was an object of awe when it first came out. Unfortunately, it's now an object of derision. The clock speed was a paltry 8 mhz. This was almost immediately beaten by the 12 mhz AT clones. The AT disk drive definition table was severely restricted, for it contained no USER DEFINED entry. It was still a pain to get a 3.5" floppy to work in an AT. 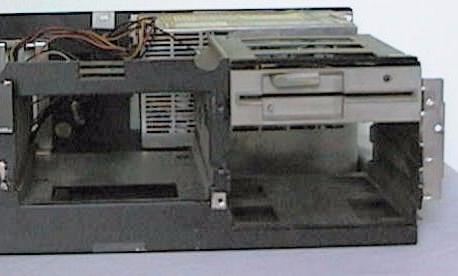 Front View Of The Drive Bays In An AT. Since Rails Are Needed To Mount The Devices, Only Four Can Be Installed.

Besides the 286 chip, the big advance with the AT was the configuring of hardware through a SETUP program. The AT did not have this built into a ROM chip. You had to run a SETUP disk. A shareware version is GSETUP.ZIP

The Original AT Only Had 512K of RAM. Memory Extension and Expansion Boards Were Often Used. Without Documentation, It's Nearly Impossible To Configure The Jumpers And/Or DIP Switches Of These Adapters. 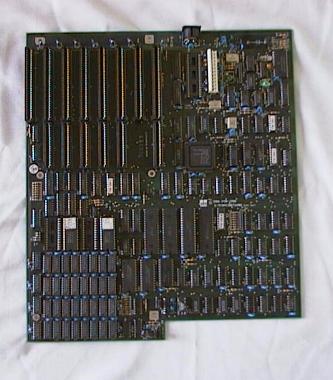 A Standard, But Ancient, 286 "Turbo" Motherboard. It's Twice As Big As A Modern System Board!

Some of the first 286 clones used proprietary power supply and case designs. Leave these in the dumpster.